A simple system to stay in touch with people 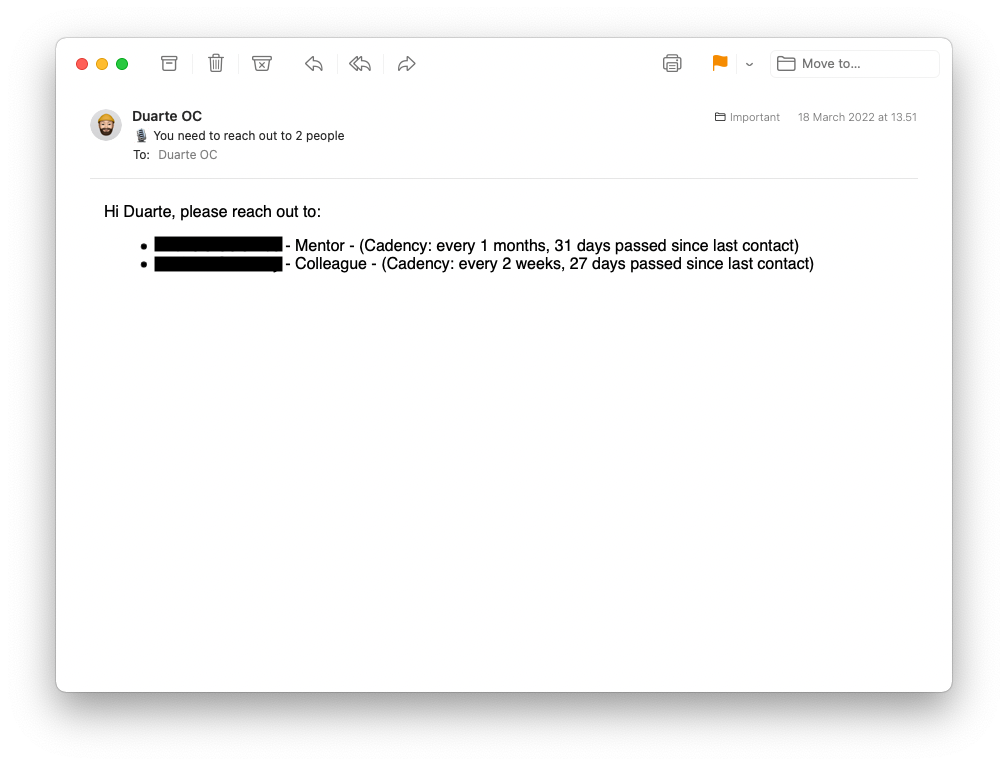 Someone once told me that my professional network is one of the most important things I'll build throughout my career. For years I've struggled to find a system that would help me stay in touch with my network. So I decided to build my own - let me show you how it works.

The idea is pretty simple, you want to stay in touch with a group of people, by talking to them every X days/months/years. Let's say you want to keep up with Jane every two months. If two months have passed and you haven't talked, you should get nudged into doing it.

To solve this, I started with a recurring item in my to-do list, but it quickly got messy. I tested Dex, but they would only allow me to keep tabs on 15 people. Monica looks like a fun deployment challenge - that's not what I'm looking for.

At the core of the tool is a simple folder. In it, every person that I want to stay in touch with, gets their own markdown file:

At the top of the file: the person's name, our relationship, and the frequency at which we should keep in touch. After that, every entry is a header with a date of contact, and some notes about what happened in that date. Here's an example:

Using a small script I call infrequent.py, I parse all the files in the people folder. The script retrieves the person's details and dates of interactions. Using some datetime logic, I then identify the people I'm late reaching out to:

Once every person is processed, the same script sends me an email with the people I'm late reaching out to, using SES.

How I use it

I store the people folder and the infrequent.py script in a GitHub repository - similar to this one. Thanks to GitHub actions, the script runs every Friday morning. When it does, I receive an email with the names of people I'm late reaching out to.

Every time I interact with someone in the folder, I update their file, and push the changes back to GitHub. It's simple, and works surprisingly well.

Here's a copy of my repo in case you want to play around with the script. Feel free to email me if you have problems getting it to run.