Down from the Cloud

I love the Cloud. For years, I've been deploying software to it. Azure, GCP, AWS, you name it. I've used most of them. To be honest, they're the same pig, but with different lipstick (like the Danes say). Package up your app, make some CI/CD magic, select your service, and I'm good to go. Still remember when I helped a whole bank move to the Public Cloud. The benefits are mostly obvious.

But I'm no bank. And it's not all rainbows and unicorns. For starters, those 10 elastic beanstalk applications can start adding up. What if I want to change from Cloud A to Cloud B? It's not like Amazon is going to make my life easy. It's a convenience/lock-in trade-off. What about user data? What about my data? Some of the best software I use doesn't even use the Cloud.

Let's come down from the Cloud (at least the public one): Self-hosting. How hard is it, really?

This one should be straightforward. There's no shortage of server providers. Just browsed LowEndBox for a while I decided to go with a dedicated server from Hetzner. Something relatively close to Copenhagen to ensure my connection to the server is snappy enough.

I don't run a lot of very high traffic sites (yet!). Something around the 50 EUR/month price point serves just fine. You'll be surprised with how much stuff you can run in this machine. I have 10 services running and my memory barely goes above 10%. Let's not jinx it.

Containerize all the things

I have a love-hate relationship with Docker. For me, it's still the most straightforward way of exchanging and packaging up software to ensure nothing breaks. But how I hate when my container starts getting fat. I'm talking about you, PyTorch.

Every application will run inside its own containerized environment. To ensure this doesn't get overly complicated, I went with docker compose. Why not Kubernetes you may ask? Because I have other things to do.

Inside the server, things look a little something like:

Using the process above, I can have a bunch of different applications running on a lot of different ports, but in a single server. Hopefully (1) saving money, and (2) increasing the power and control over them.

Hopefully, I won't land on dependency-nightmare-land.

Self-hosting sounds great. Having to ssh into a server every time I want to update a service, doesn't. If there's one thing I'm not willing to compromise on, it's continuous deployments. The whole git push automatically updates the app thing is super convenient.

Enter GitHub actions. With them, you can automate the ssh'ing and re-deployment part. It's not the most secure option. But hey, it works pretty well. Surprisingly, it's also much faster than deploying on Elastic Beanstalk or Cloud Run.

Alright, it's time to expose these apps to the world. I'll admit it. The sheer mentioning of https certificates or DNS runs a chill down my spine. After loosing a couple of hours in the reverse proxy documentation for Nginx and getting a bit mad, I found this little thing called Caddy. Oh boy, that was easy.

Caddy solves the whole subdomain, reverse proxy, multiple websites on the same server, HTTPS mambo jumbo. The docs are great, and it's super straightforward to use. I definitely recommend their Getting Started docs.

First step is to point some A record in your DNS to your server's IP address. I use Cloudflare for this, do recommend. Once Caddy is installed in the server, all you need to do is create a Caddyfile:

Caddy automatically enables HTTPS for all of the apps you specify on your Caddyfile. It also automatically issues new certificates and renews them. Changes? A simple caddy reload and you're up and running again.

I can have as many subdomains/domains pointing to the same server as I want, as long as the server can handle it. 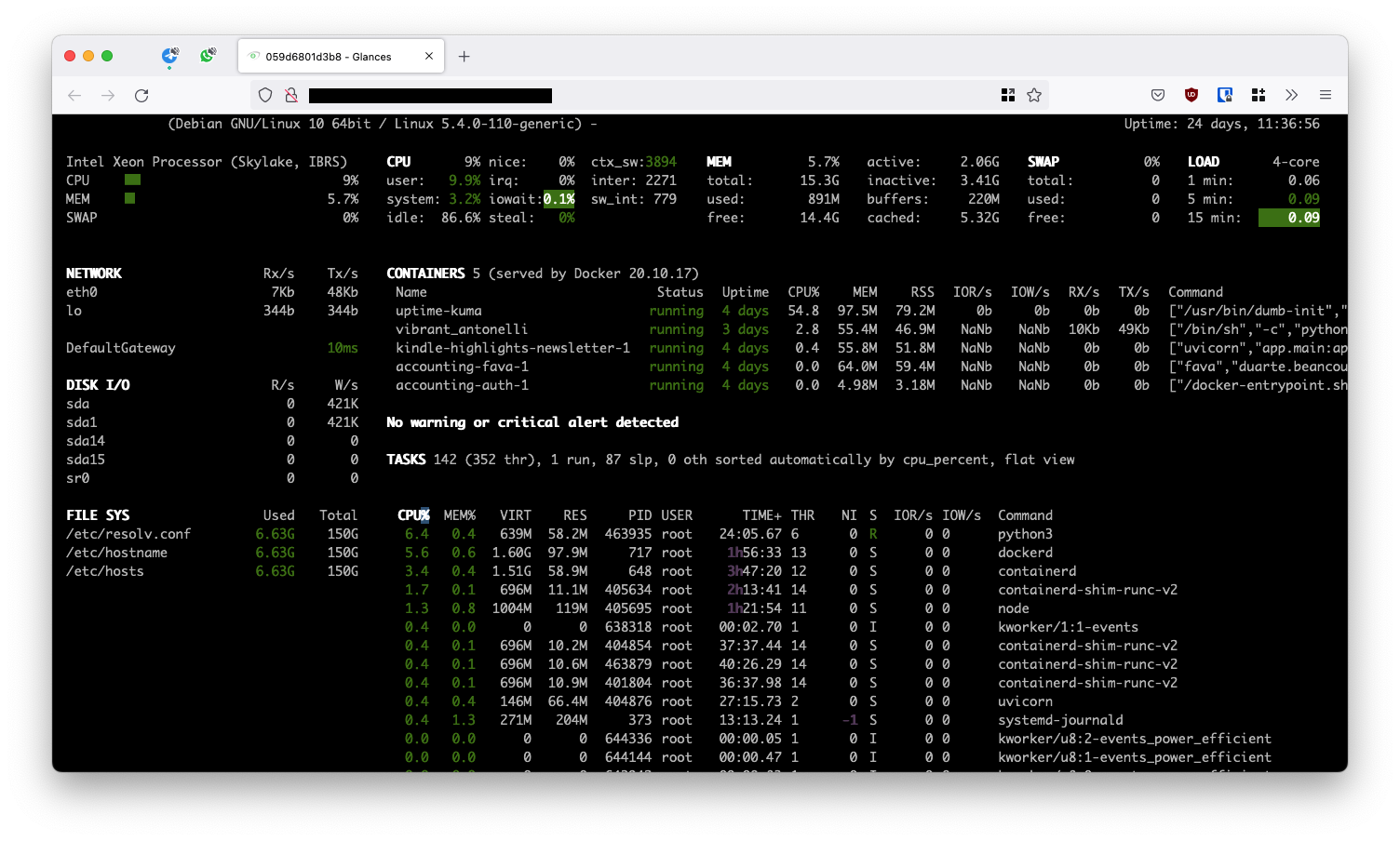 One of the services I'm currently self hosting is called Glances. With it, all of my server's metrics an url away. With about 5 containers, the CPU is still below 10%.

No. I don't have all the elasticity that the Public Cloud gives me. But do I need it? The deployment method is the same (git push), the speed of services are the same (mostly static with Cloudflare on top), the cost is lower, and data is controlled by me. Sounds like a treat.